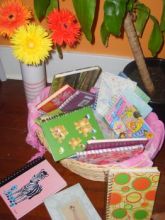 Something is missing in my life right now. I've had a hard time pinpointing the source. Our minister recently reminded us that "change is difficult." He talked of the writer's strike and how instead of watching ER and Grey's Anatomy on Thursday nights he and his wife were now watching "Am I smarter than a Fifth Grader?" This got me thinking about my own recent changes. We changed our diet recently (in both sneaky and deceptive ways) and I've caught myself blaming my moods on the flaxseed and sweet potatoes. We've also been moving our bodies more. On weekdays the kids and I watch the first ten minutes of Ellen using the dance segment to inspire an hour of bopping around. I've also started wearing make-up. These changes have been difficult, but ultimately they have added to my life. The void remains.

This week I am blaming a group of people who do not really exist. My characters. This inkling came over me after rereading an underlined passage from John Dufresne's The Lie that Tells a Truth: "If you never revise, you never learn to write. You see that these made-up characters of yours have become vivid and intriguing people who live interesting and terrifying lives. You begin to resent the time away from them."

It has been two months since I've done any revisions on my first novel, which is probably the longest break I've ever had from these characters. And with their story maybe on its way to who knows whose inbox, it feels like the characters have been left in limbo. This feeling of not trying to improve their lives or make them more uncomfortable is consuming me. Waiting to hear whether this or that editor thinks the lives of some people I made up are worth reading about is unnerving. This disconnection from them is wholly new to me. It feels a bit like death, in fact. It makes me wonder whether authors feel better when their characters are lurking in the bookstores and libraries, or if they always feel a bit lost without them.

Though I'm doing my best to let go of my first novel in order to focus on number two, this change is more than difficult. At times my new characters feel like they belong in a sit com spin-off that should never get past the pilot. The quote above triggered me to journal about bonding with characters, and how I did it the first time around. It took a bit of digging, but I found an old file folder from the first draft stage that took me back to the heart of the process. In the file there were magazine pictures and cue cards with lists of character traits, including dreams and fears of bus drivers that didn't even make the cut. The pictures and charts reminded me of how I used to write letters to the characters when I got stuck on a scene. If I was still stuck the characters wrote letters to each other. Thinking back, I did as much as open fake bank accounts for these people. I once colour coded all of their dialogue.

As well as feeling a bit of grief and loss for the old, I'm feeling a bit sorry for the new. I've written almost 70, 000 words, and yet I can't even picture the faces of the people in the story. Some major changes are going to have to take place if I want to convince these people to walk into a second draft. I need to start dreaming about them. They need to come into the kitchen with me and do five loads of dishes. They need to stand in line at check outs and sit in back church pews. I need to take these people to work, to the library, and to baby group. I need to call them up. Maybe even look for them on Facebook. Change is difficult.

Added March 27: I found this quote today while reading Laraine Herring's  book "Writing Begins with the Breath."  Finding this advice right when I need it is one of those life changing treasures I was talking about last month:

"We wear the skins of our characters, who take us where they need to go. Then we shed the skins of the characters so new characters and voices can come. If we hold on too tightly to the characters we've come to love, we'll clog up the flow and prevent the next novel from coming in." Laraine Herring

Dear Tara,Your such a great writer, Your words are magic, I enjoyed reading every line.I will tell you some thing that might capture the image of the people in your story.At bed time, close the light, lay your body on your bed,relax for a while, then run your story in your head from the very start till the last,try to be there in your story, like a camera man or some thing.I think its the best way.It's my best thing to do before sleeping for me, I live in a dream before surrender to my log off system.Tara good luck, this was the first time for me to read your Blogs, And I will read more.Kind Regards.Bader
4.11.10 @ 12:08

Posted by The writer: